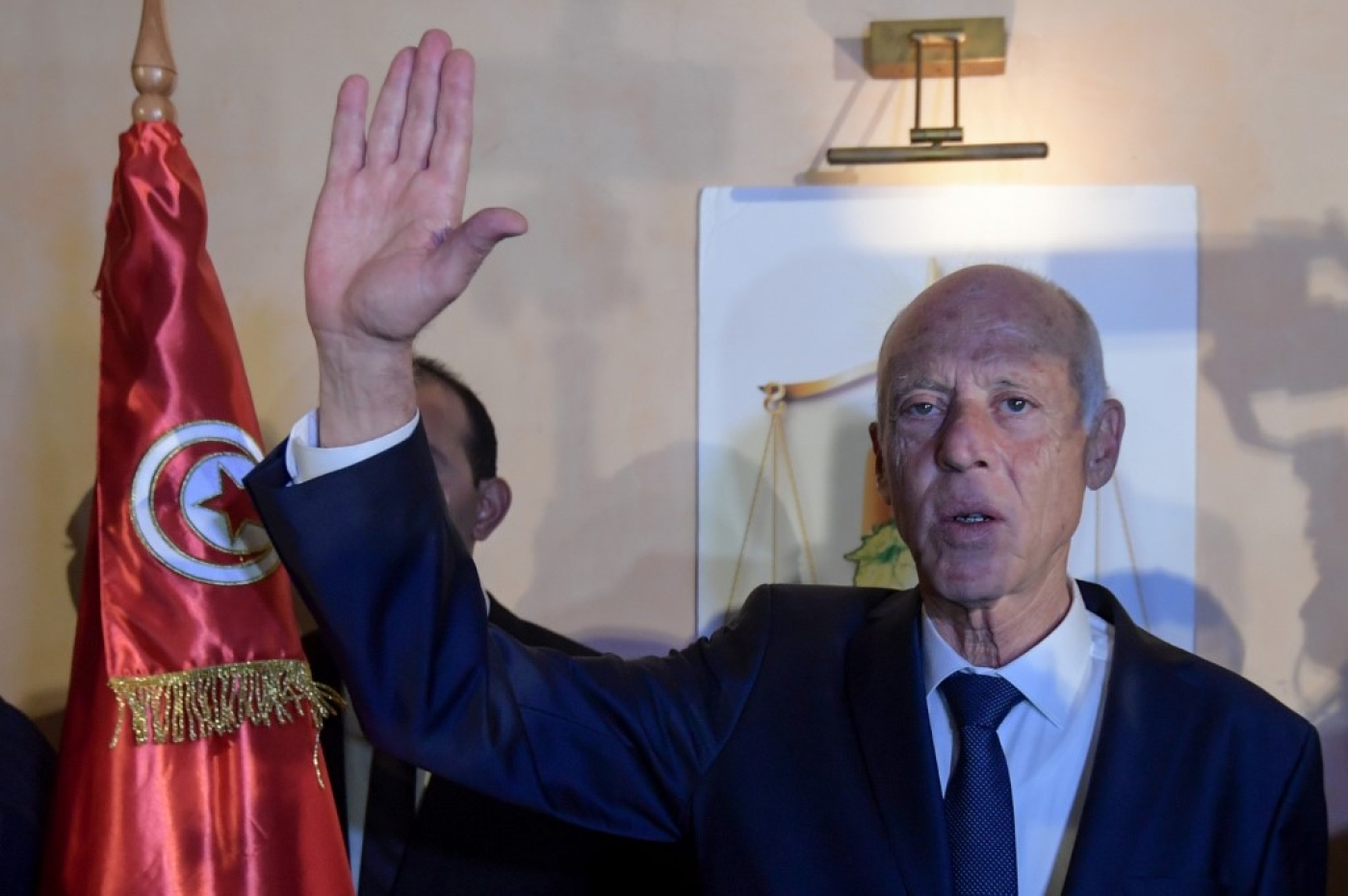 Saied, who came to power in 2019, has previously been accused of laying the groundwork for a ‘soft-coup’ inside Tunisia (AFP)

Kais Saied’s top advisors have urged the Tunisian president to seize control of the country from the elected government as it grapples with the coronavirus pandemic and mounting levels of debt.

The plan would be to lure Saied’s political rivals to the presidential palace and announce the coup in their presence while not allowing them to leave. Other top politicians and businessmen would be simultaneously arrested.

The plan is contained in a document passed to Middle East Eye, labelled “absolutely top secret” and dated 13 May. It is addressed to Saied’s chief of staff Nadia Akacha and outlines how the president would enact a chapter of the constitution which – under a national emergency –  would give him complete control of the state.

Under the plan, leaked from Akacha’s private office, the president would call an urgent meeting of the National Security Council at his palace in Carthage, under the guise of the pandemic, the security situation and the state of the country’s public finances.

Saied would then declare a “constitutional dictatorship” which the authors of the document say is a tool for “concentrating all powers in the hand of the President of the Republic”.

Labelling the situation as a “national emergency,” the document states: “In such a situation it is the role of the President of the Republic to combine all powers in his grip so as for him to become the centre of authority that enables him to exclusively hold… all authorities that empower him.”

Saied would then ambush those present – which would include Prime Minister Hichem Mechichi and Rached Ghannouchi, the Speaker of Parliament and leader of Ennahda party – with the announcement that he would be enacting chapter 80 of the constitution which allows the president to seize powers in a national emergency.

The document states that Mechichi and Ghannouchi would not be allowed to leave the palace, and that the palace would be disconnected from the internet and all outside lines.

At that point, the president would make a television address to the nation in the presence of Mechichi and Ghannouchi to announce his coup.

The document then states that a general, Khaled al-Yahyawi would be appointed acting interior minister and that armed forces would be deployed “at the entrances of cities, vital institutions and facilities”.

To make the coup popular, the document says that all payments of bills or electricity, water, telephone, internet, bank loans and taxes would be suspended for 30 days, and the price of basic commodities and fuel cut by 20 percent.

Asked whether they thought Saied planned a coup, a member of the cabinet of the president told MEE:”I don’t think so. It’s just a Facebook rumour. In Tunisia you can hear anything.”

The document states that once the president had sprung his surprise on his prime minister and the head of parliament they would be kept in limbo.

“The session would afterwards be ended without allowing the attendees to leave Carthage Palace, while keeping the Presidential Palace area, prior and afterwards, temporarily disconnected from the communication and internet networks,” the document says.

The plan also includes proposals to bar any parliamentarian wanted by the Tunisian courts from leaving the country and relieving all governors affiliated with a political party from their posts.

The president would also undertake “a comprehensive ministerial reshuffle while keeping only the prime minister, but no one else”. He would be advised by a bevvy of emergency committees. Asked why Saied would want to keep the prime minister while replacing all his ministers, a top Tunisian political source with close ties to the presidency, said that this would be a way of neutralising him without having to immediately remove him, which is a complicated procedure involving a vote of parliament.

Mechichi would be kept on temporarily as prime minister to avoid having to make all these steps, the source, who wished to remain anonymous, said.

The source, who is close to Saied’s advisers, said that the plan had been discussed by circles close to the president since April 2021, but had not been given to him directly.

Saied, who came to power in 2019, has previously been accused of laying the groundwork for a “soft-coup” inside Tunisia.

Earlier this year, he described the presidential role as the “supreme commander of the military and civilian armed forces” during a speech attended by both Mechichi and Ghannouchi.

“There is no distinction. The law, the world’s texts and the code of contracts and obligations all mention it. The armed forces are the military and the security forces.”

His specific mention of the president’s power over the internal security forces had sent alarm bells ringing within Tunisia’s political establishment.

The court would have been the first of its kind in the Arab world.

In January, Saied also refused to swear in ministers chosen by Mechichi in a cabinet reshuffle, saying that the individuals in question had conflicts of interest.

The political source said: “The only solution is dialogue. President Kais rejects all dialogue initiatives… his project was to amend the constitution and cancel the legislative elections.”